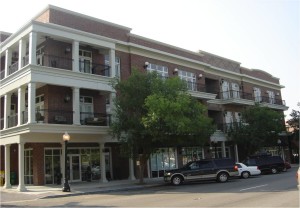 One of the goals of the members of the Aiken Corporation and ADDA was to identify the weaknesses in the downtown business district. Some of them included inadequate parking, unsightly businesses, no public restrooms, and uninviting sidewalks. A committee of community leaders determined the assets and liabilities of downtown Aiken. The focus was to establishing enthusiasm about downtown revitalization.

The Aiken Corporation and the ADDA, together with the Greater Aiken Chamber of Commerce, Economic Development Partnership, and the City of Aiken were instrumental in enhancing local growth and development. This partnership between the private and public sectors resulted in numerous projects that completely changed the city’s make-up and appearance.

The cooperation between the Aiken Corporation, ADDA, the Greater Aiken Chamber of Commerce, Economic Development Partnership, and the City of Aiken resulted in a five-year fund raising and action plan (The Plan) with an intent to accelerate economic and community development. The Plan included programs and projects identified by each organization and projects which were identified in the City of Aiken’s Strategic Plan. In 1993, the City of Aiken contracted with the National Community Development Services (NCDS) to conduct a feasibility study to analyze the five primary areas of the Plan:
1. Opinions regarding local economic conditions and economic expansion
2. Awareness of the proposed economic and community development programs and recommendations for new initiatives
3. Level of support or criticism of the proposed economic and community development programs
4. Level of funding available to underwrite the proposed programs
5. Level of volunteer support and leadership available for a funding campaign

As a result of this feasibility study and the efforts of the members and the leaders of the Aiken community, the Aiken 20/20 Project was initiated. The main goal of the Aiken 20/20 Project was to ensure the broadest possible investor support. After a very successful campaign, the fundraising efforts resulted in $3.5 million from combined private and public sectors. As a result of the work of key community organizations and partnership between individuals, government, and businesses, significant economic growth has occurred in the City of Aiken and broader Aiken area.

In summary, several important projects resulted from the grants obtained through the Aiken 20/20 Project. These include the following:
•  Development of Industrial Parks and “Spec” Buildings
•  The Streetscape and Lighting Program
•  Airport Terminal
•  Aiken Center for The Arts
•  Relocation of the Greater Aiken Chamber of Commerce
•  Relocation of Aiken Community Playhouse to the Washington Center for the Performing Arts
•  Formation of Public Education Partners Program